Karen Polymniou and Kathryn Scordino, strategic HR business partners in the Co-op’s Food business, have successfully moved company as a job share partnership. Heather Greig-Smith talks to them about their arrangement.

Job share partners Karen Polymniou and Kathryn Scordino have not only spent three years working as a team, they’ve achieved the rare success of moving to a different company as well.

Their partnership began at Barclays in the retail bank, when a restructure presented the opportunity for Karen to work part-time. Kathryn was on maternity leave and so she approached her to see if she would consider applying for a job share.

“We were lucky to have a line manager who was advanced in her thinking and keen to support us,” says Karen. “She got the support of the senior executive.” They had access to consultancy advice from Capability Jane, helping them set up their job share and identify how it would best work.

The pair then spent a year and a half leading the HR change function for the Retail Bank, before deciding to move on in 2014. Their previous line manager had moved to the Co-op and recruited them to an interim HR role, reorganising the leadership for the food stores. That has led to a permanent position, leading a team of ten.

Experimenting with different ways of working and structuring the partnership has been essential to finding the right balance. Initially they each took responsibility for separate areas, but this made it hard to do certain things at short notice and for one to cover effectively for the other.

“Over time we realised that division wasn’t working so changed to a ‘pure’ job share – sharing all elements of the role,” says Karen.

Like many job shares, they each work three days, crossing over on a Wednesday. Perfecting their handovers has been a vital ingredient for success. “It’s really important that you have the time to properly hand over and share what’s happening,” says Kathryn. “You need to make sure you’re aligned and that’s difficult to do on paper alone.”

Instead they operate a combination of handover notes, phone conversations and face to face contact. “We tried different things – such as leaving voicemails, but we both find it really helps if we have the piece of paper to refer back to. We have each other’s personal numbers and occasionally we will contact each other on non-working days but this is unusual,” she adds.

Karen adds: “On our non-working days it would be easy to think ‘I’ll have a quick look at my emails’ but you might get drawn into something and that just creates confusion for the business, so we sometimes look but don’t respond knowing that our partner will contact us if they need anything”.

The pair have gone through the experience of interviewing for a new position together with a joint CV and joint interviews – something they feel was as much of a challenge for the interviewers as for them. “Prior to the three years we have job shared, we had a lot of experience of roles in our own right. You want to know that the partnership is going to work but also that both individuals have the combination of experience you need,” says Kathryn.

Job sharing is a new phenomenon in the Co-op but already they say the benefits of having two skill sets in one role are appreciated. While they credit their move to the leader who had previously worked with them at Barclays, they relish the chance to demonstrate the benefits to the wider company. Already there are other job share partnerships appearing.

One of the key benefits is the difference in skills that they bring to the company. Though they share values, they are very different in their strengths and approach. “I’ve learned from Kathryn and am better at doing things on the spur of the moment,” says Karen. While Kathryn adds that she values her colleague’s attention to detail. “Karen is a lot more detailed and analytical than I am – together we end up with a better piece of work.”

“People often come to us because they know they will get slightly different perspectives. We hold joint performance and development reviews with our team, which they value because they get more rounded feedback.”

There are times when one has been able to change her working days – allowing them to cover two important events in different places – not something a full time worker could ever achieve.

Both have previously worked in part-time roles and found it challenging to manage the work building up in their absence. “In a job share you can be 100% committed while at work, but trust that things are being well managed while you’re not there,” says Kathryn. “It’s the best of both worlds.” 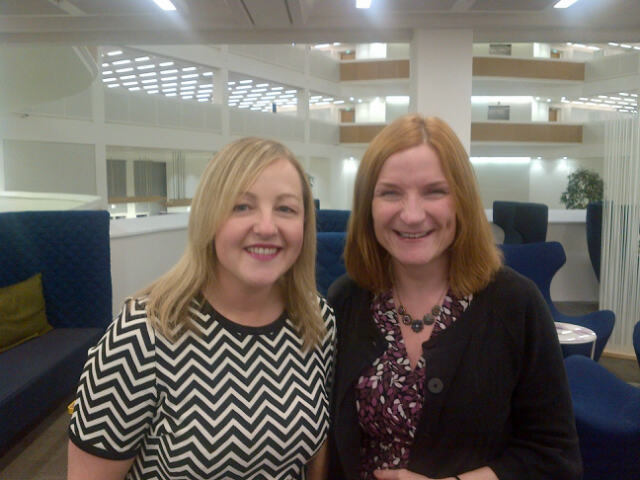